This Voice Get In Touch 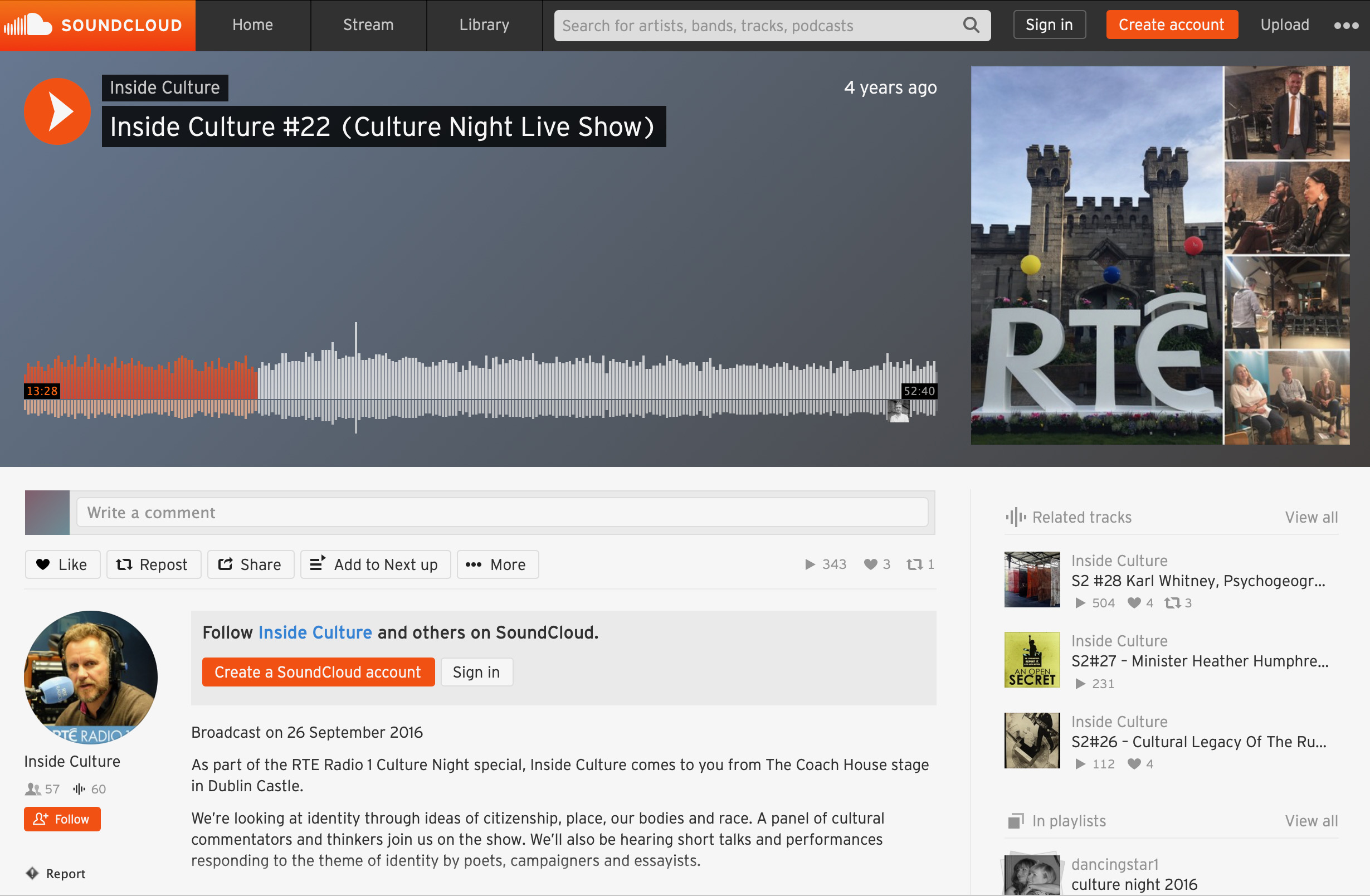 On Culture Night 2016, as part of a special broadcast event for an audience in Dublin Castle, Colm was commissioned by RTE to write a piece in contribution to a discussion on Irish identity.

Colm responded to the notion of “voice and identity” alongside Peter Murphy, Chris Kissane, Emma Dabiri and Mark O’Connell.

Scroll down to read the full poem.

This voice was born in 1975, in holles street hospital, where it cried out with scores of others, joined in with a symphony of tiny voices demanding nourishment, touch, warmth.

This voice belonged to a toddler in Ballymun, then a four year old, screaming cause it was locked in a lift, or howling at the seagulls, spiralling down the concrete steps out into the roads up into the air to mix with the jets flying overhead.

This voice became something to be judged, the sound of the scanger, the scummer.

This voice once tried but couldn’t rise above those titles, internalised the tribal jibes that might bounce off a thicker skin.

This voice’s balls dropped as it took all that on board, this voice was often part of the mob, screaming abuse at authority, teachers, coppers.

This voice started to talk about love, this voice tried to talk women’s knickers off, but this voice in the presence of women, was usually lost.

Then this voice grew up, grew older, some babies where born – this voice sang lullabies, became stronger, learned how to give orders, instructions, took on the soft tone of forgiveness when needed. This voice matured. It carried more.

This voice found a place at work, roared above the machines on the factory floor, sold lies down a mobile phone for profit. Talked about believing in things that it didn’t believe like low hanging fruit and going fucking forward. This voice couldn’t survive there for long. This voice didn’t have the right pitch for that nonsense.

This voice talked teens into kayaking, directed them in small plastic boats, showed them the dublin’s mother, the liffey, taught them its song:

You can’t control the flow, you must follow where it goes.
don’t try to block it for too long, without release, it will overflow.

This voice owes so much to books, how they transmit ideas – words that hit like a punch, like a bullet shot from a gun, or like a kiss, like falling snow dropped onto water.

This voice surrendered to words, bent down at the altar of them.

Until this different voice bubbled up, like a river after enough rain.

And then this voice found the stage

Joined the rumble of an underground spoken word scene that exploding across dublin, that draws no lines between performer and audience, something anarchic, a bit punk.

This voice could be absorbed by the establishment, like all voices are absorbed, but once it knows its place isn’t inside the castle, it’ll keep on.

This voice has travelled, a vast distance, not just across time, but across space, where it was sent from a microphone, transformed into a billion digital bits, pinged up to a satellite dish, back down and straight into your kitchen where it moves through you as sound waves, resonates in the echo chamber of your ribcage, and transforms into synaptic flashes that electrify your neural pathways.

This voice could sit there for years, or for just a few minutes.

This voice hopes to make a difference.

This voice knows it could be
choked out, strangled, gagged,
Burned at the stake
beaten shot stabbed
For saying what it wants to say

but stamp it out, quell it, kill it
Go on
It will just erupt in a different place.
Because this voice isn’t mine
This voice is the cliche of the green
shoot that cracks open the pavement.
This voice is not just me, it’s you.
And it’s screaming at you to tell the truth.

This voice is not going to leave you alone, even when you keep your trap shut, it goes around and around in your head.

This voice knows what you want to say, and it won’t stop until it’s said.